This summer Luke Stamps and I had a relatively brief interaction about penal substitution and its catholicity. One of the common objections to penal substitution is that it is not found in the early church’s theological reflection. While we gave some brief examples in our posts of where it might be found, at least implicitly, there is a larger problem with this kind of approach to the Patristic period. We often use the early church in one of two problematic ways: either to proof-text in support of our position or to make an argument from silence against a position we oppose. While methodologically speaking the former is a bit easier to confront, the latter seems more prevalent these days (at least in my reading). Our hermeneutics classes have warned us of proof-texting enough that I think it’s easier to reject that approach not just biblically but historically. What is harder to reject, but what is just as problematic, is citing the silence of the Fathers as proof that a doctrine isn’t biblically or theologically warranted.

This is methodologically suspect on at least two levels. Historically, it ignores the fact that Christian doctrines develop over time. Theology does not exist in a vacuum, nor is it worked out in all its loci all at once immediately after the last apostle passes away. It should be clear to those who have studied church history that the Patristic and Medieval periods are given over to working out the doctrines of the Trinity and Christology. Soteriology and ecclesiology are the focus of theological reflection in the Reformation and post-Reformation periods, while anthropology and eschatology (to name just two) are being worked out in much more detail in contemporary theological discussions. To ask a second century apologist to speak about the Triune God with the same level of exactness as fifth century Christians is anachronistic. And to argue that a particular understanding of the atonement (e.g. penal substitution, or justification by faith alone) is not warranted because the Fathers do not mention it[1] is to miss the point that soteriology is largely assumed and not worked out with particular fervor or exactness until the Reformation. In other words, historically, this “argument from Patristic (or Medieval) silence” is an error of anachronism.

The “argument from silence” is also theologically problematic. For Protestants, the ultimate doctrinal standard is not a particular period in church history or how early or late a particular doctrine is widely attested, but whether or not a particular doctrine is faithful to Holy Scripture. While we certainly want to pay attention to any belief’s development, our assessment of it, if we are to be fully Protestant, should rest finally with whether or not it conforms to God’s Word. As Protestants, we affirm that the church can and does make mistakes, ethically, interpretively, and doctrinally. Just because the first, second, or third (etc) generations of Christians after the apostles believed something does not make it automatically true, nor does their lack of attestation to a belief make that belief necessarily false. Sola Scriptura demands that we make those judgments ultimately from Scripture, not via picking a particular period of church history as more important than another.

That said, there is a reason we often look to the Patristic period for validation of our beliefs – it is important both historically and theologically. Historically, it is most immediate to the apostles and their teaching. More importantly, perhaps, is that, theologically, the conclusions of Nicaea, Constantinople, and Chalcedon are accurate summaries of biblical teaching about the Trinity and about Christ, and therefore can be used (penultimate to Scripture’s authority) to assess whether or not later doctrinal developments are faithful to the good deposit of Scripture and the church’s summary of it in the three ecumenical creeds. So it is not as though I am arguing that the early church is unimportant in theological reflection. By no means! But I am saying that arguments from silence are not proper method, either historically or theologically.

[1] I’d argue they do, but it is still a very minor theme in their discussion of salvation when compared to its prominence in contemporary evangelical theology.

My wife, Aubree, and I recently had a chance to get away for a few days to visit Rome—the Eternal City. It was a great visit and Rome truly is one of the greatest cities, if not the greatest. We spent a few days doing the normal tourist things like finding pizza and gelato.

One of our destinations—not too long after some gelato—was the Catacombs of Priscilla, “Regina Catacumbarum: The Queen of the Catacombs.” This catacomb, was used during the 2nd–5th centuries AD and houses some 40,000 Christian graves with a great number of Christian martyrs. The tour was an interesting experience and I marvelled that the tombs were used by rich and poor Roman Christians because they desired to be buried together so that they might all resurrect together.

A particular meaningful part of the tour was a room called the “Cubiculum of the Veiled Woman.” It is thought that these frescoes date somewhere to the second-half of the third century, but I think what is really interesting is that it has a biblical theology of resurrection of sorts represented through painted frescoes.

The centre of the room has a young woman praying with her arms extended, and directly on her left and right are other life scenes—possibly scenes from her life or the life of her family. And above her, in the centre of the ceiling is a painting of the Good Shepherd in Paradise surrounded by lambs, peacocks, and doves.

Each of these scenes depict resurrection, but it is interesting there is no picture of the empty tomb. It is clear that they put hope in that event, but these early Christians drew upon the Old Testament Scriptures as a way of depicting their hope of the resurrection of the dead. It appears—and I’m no Robert Langdon—that early Roman Christians understood that these Old Testament images reveal the character of God and his providential patterning of the future. What God has done in the past, they trust he will do again in the future. 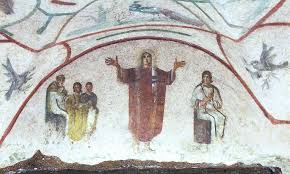 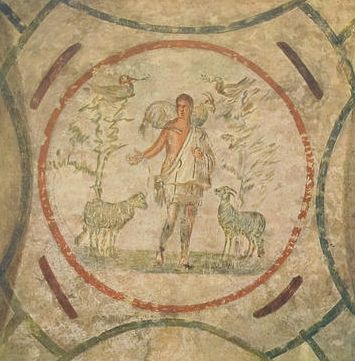 The last few years has shown a great interest in the reception history of single texts, biblical books, and even entire portions of the canon. There have been great books and commentary series devoted to such studies. Reading Scripture with the Church Fathers by Chris Hall, the Ancient Christian Commentary Series edited by Thomas Oden, and the new Reformation Commentary Series edited by Timothy George are a couple examples. These and other such work highlights that interpreters through history were asking different questions than those asked of the present and can help show our interpretive “blind spots.”

Of these and such like words written by the prophets, O Trypho,” said I, “some have reference to the first advent of Christ, in which He is preached as inglorious, obscure, and of mortal appearance: but others had reference to His second advent, when He shall appear in glory and above the clouds; and your nation shall see and know Him whom they have pierced, as Hosea, one of the twelve prophets, and Daniel, foretold (Justin’s Dialogue Chapter XIV).

And Zechariah also, among the twelve prophets, pointing out to the people the will of God, says: “These things does the Lord Omnipotent declare: Execute true judgment, and show mercy and compassion each one to his brother (Irenaeus Against Heresies Chapter XVII).

For it is expressly said by Joel, one of thetwelve prophets, “And it shall come to pass after these things, I will pour out of My Spirit on all flesh, and your sons and your daughters shall prophesy” (Clement of Alexandria The Knowledge of God a Divine Gift, According to the Philosophers Chapter XIII).

The prophecy of Isaiah is not in the book of the twelve prophets, who are called the minor from the brevity of their writings, as compared with those who are called the greater prophets because they published larger volumes (Augustine Chapter 29.—What Things are Predicted by Isaiah Concerning Christ and the Church).

And this is in common language so unprecedented, or at least so rare, that we are only convinced that the twelve Prophets made one book, because we read in like manner, “As it is written in the book of the Prophets.” There are some too who call all the canonical Scriptures together one book, because they agree in a very wondrous and divine unity.…(Augustine On the Psalms–Psalm CL).

Accordingly when I went East and came to the place where these things were preached and done, I learned accurately the books of the Old Testament, and send them to thee as written below. Their names are as follows: Of Moses, five books: Genesis, Exodus, Numbers, Leviticus, Deuteronomy; Jesus Nave, Judges, Ruth; of Kings, four books; of Chronicles, two; the Psalms of David, the Proverbs of Solomon, Wisdom also, Ecclesiastes, Song of Songs, Job; of Prophets, Isaiah, Jeremiah; of the twelve prophets, one book; Daniel, Ezekiel, Esdras (Eusebius Pamphilus 206, Nicene and Post-Nicene Fathers).

The majority of what I found was that the early church recognized the Minor Prophets as a unity, some going so far calling it a single book despite the lack of any type of codex existing. At this point I have not seen in the Fathers an approach to read the Minor Prophets as a book but I was intrigued by how many references there were to the entire collection.

This is the blog of Matthew Emerson, Luke Stamps, Luke Wisley, and Brandon Smith. Topics include biblical and canonical theology, hermeneutics, systematic theology, and whatever else pops into our head.